The dataset from 100 For Parkinson's is now larger than 2.2 million data points!

In February 2016, uMotif – the world's leading patient data capture platform – launched a global movement, asking people with Parkinson's and supporters to track their health for 100 days using their own smartphones in the '100 for Parkinson's' study. The goals of the study were to help participants learn more about their own health, to understand how technology can support people living with Parkinson's and to build a research dataset to drive new insight including filling knowledge gaps between the twice-a-year visits to consultant neurologists.

The response to 100 for Parkinson's was phenomenal, with 4,218 people signing up to take part in the United Kingdom and United States, and requests to join from over 50 countries around the world. All participants – those with Parkinson's and non-Parkinson's 'controls' - agreed to donate their de-identified data for research, which has created a new research dataset of over 2.2 million data points.

During the study, participants tracked 1.3 million symptoms scores, recorded 14,297 free-text diary entries, completed 7,641 Patient-Reported Outcomes Questionnaires and connected data from 209,440 data points from participants' wearables devices. You can view the latest data visualisations from the study below, showing which symptoms participants feel are most important to them: 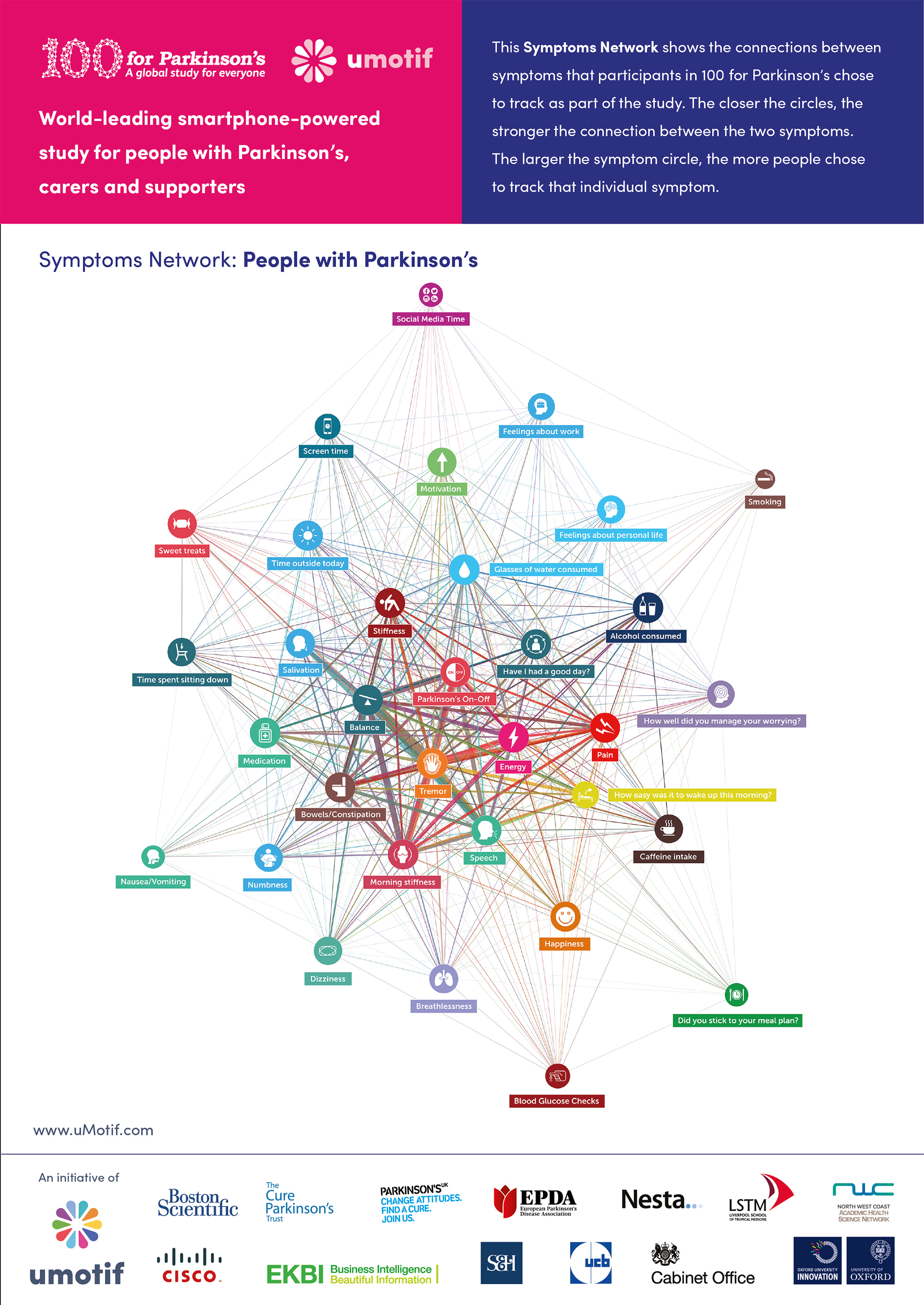 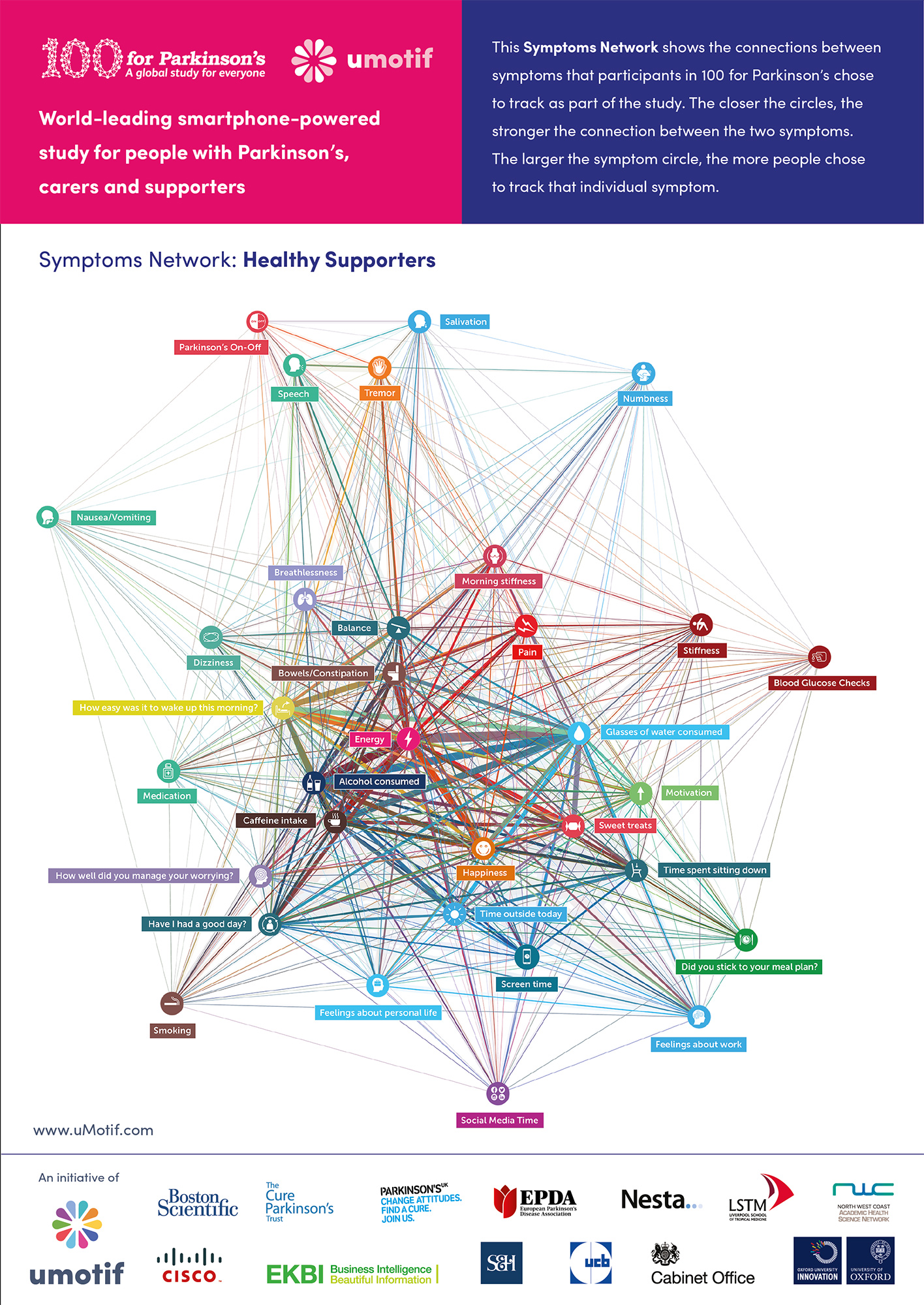 Taking part in the study has made a positive impact for thousands of patients, like Mick, who explains how he has benefitted from using a tool that puts him at the centre of research on the uMotif blog. He sums up his experience in smartphone research:

“[while entering useful research data into the app], it teaches you as well - don't beat yourself up because you can't do what you used to do, look at what you are doing."

“This project changes the dynamics of Parkinson's research by drawing on information which is as valuable to the individual living with Parkinson's as it is to the scientists involved in research. The simple daily input mechanism is easy to use and can greatly enhance someone's understanding of the patterns and fluctuations of their own Parkinson's without the need to leave their homes. This is a critical component of re-establishing quality of life after a Parkinson's diagnosis. At the same time, the collection of the data about these experiences will be critical in better informing and guiding the research process"

Participants chose the daily symptoms they wanted to track during their 100 days, personalising the study to each person. Preliminary results show that people with Parkinson's often chose to track their balance, how many glasses of water they consumed, issues relating to constipation, their tremor and how easy it is to get up in the morning. These findings can be seen in two new infographics published to make the completion of data capture for the study – one for people with Parkinson's and one for the healthy control participants who took part. This gives new insights into what matters most to people with Parkinson's, enabling researchers to focus on these issues in the future.

Many participants had several other Long Term or Chronic health conditions - the most common were high blood pressure, arthritis, depression, lung disease and type 2 diabetes.

Commenting on the completion of the final patient within the study, Steve Ford, Chief Executive of Parkinson's UK, said:

“Parkinson's affects people in different ways so empowering people with Parkinson's to monitor their own condition, using smart devices, can help them better understand and take control of their symptoms.

“With further research and analysis, we hope data collected from all the participants will take us one step closer to finding a cure for the 127,000 people in the UK living with Parkinson's."

The study was supported by a range of partner organisations. Steve Turley, Managing Director of UCB Pharma British and Irish Isles said:

“UCB is constantly exploring how to place the patient at the centre of everything that we do, and 100 For Parkinson's is a fantastic example of the potential in research and real world evidence that can be tapped using patient's own devices"

All the data was entered by study participants, using their own smartphone or tablet devices at a time most convenient to them. Participants completed an ethics and IRB approved informed consent process in the app, to confirm donation of their de-identified data for research. This study demonstrates what we passionately believe at uMotif, that clinical research can be transformed by digital technology, unlocking hidden secrets for our health. In 100 for Parkinson's, the study used patients own smartphones to gather data on how patients felt they were progressing, capturing daily symptom data, diaries and clinically validated questionnaires, as well as more objective measures through bespoke digital neurological games.

“The volume of data collected through 100 For Parkinson's has surpassed our wildest expectations. To generate this volume of data through traditional clinical research mechanisms would present significant barriers to research taking place. Through the power of participants' own devices, we were able to overcome geographical barriers that would often exclude many participants from taking part. This is especially true in a condition such as Parkinson's, where some people may not be able to attend distant research clinics."

Once processed and cleaned, the data from the study will be made available through the Sage Bionetworks Synapse Platform. Academic researchers and commercial entities will be able to apply for access to the data for their own proposed research, following scrutiny by a committee comprising patient representatives and Parkinson's patient groups.

The sponsors, uMotif, will set a Grand Research Challenge for the research community, posing questions that the data can help to answer.

100 For Parkinson's is an initiative of uMotif supported by The Cure Parkinson's Trust, Parkinson's UK, the European Parkinson's Disease Association, Nesta, Boston Scientific, the Cabinet Office, Cisco, East Kent Beautiful Information, Oxford University Innovations Clinical Outcomes, the Liverpool School of Tropical Medicine, the North-West Coast Academic Health Science Network, Sudler and Hennessey and UCB Pharma. Funding came from Nesta and the Cabinet Office as part of the Centre for Social Action Innovation Fund, a £14 million fund to support the growth of innovations that mobilise people's energy and talents to help each other, working alongside public services.

The interest in 100 For Parkinson's shows the untapped public demand to take part in clinical research, and the uMotif platform's reach in delivering this research into the hands of those who want to contribute. As few as 3% of patients in certain conditions are able to participate in clinical trials under the current paradigm.[1]

“Seeing the feedback from patients taking part in the study underlines how much people benefit from digital tools that enable them to contribute to the research community's efforts. Not only have these patients been able to take part in ground-breaking research into the needs of people with Parkinson's, but they have been able to make discoveries about their own underlying conditions in the process. We can see the impact for individual participants reflected in the feedback sent to uMotif"

Other participant feedback from 100 For Parkinson's shows how patients have engaged with the study through a platform designed to give them a voice in research:

“Great app. I intend to continue using it beyond the 100-day limit of the study if this is possible. Having the data to hand the next time I have an appointment with my PD consultant would be useful for reviewing my progress."

“The app is becoming part of my daily routine, as like today I will see for myself that you do. Have good days, which will help you through the rough days."

Visit www.100forparkinsons.comto read about the history of the study from its official launch in February 2016. As results from the analyses become available, summaries will also be published here.

[1] Transforming Clinical Research in the United States: Challenges and Opportunities: Workshop Summary. Institute of Medicine (US) Forum on Drug Discovery, Development, and Translation.